Harry Strange in The Stones of Solomon
For the first time in print, the first season scripts of The Harry Strange Radio Drama.
A beautiful woman walks into Harry’s office and asks him to recover some property stolen by her ex-lover. Harry surmises two things, she’s not telling him everything, and she’s rich. This is his kind of case. He takes the case, cashes her check, and loses his taste for red meat for a while. Much later, he’ll discover those ‘little stones’ can mean the end to creation.
Along the way to saving the world, Harry fights demons, the mistress of nightmares, vampires, werewolves, Lilith, and a horrible little troll of a man named Mr. K.
These are the original, uncut scripts from the award-winning first season of the Harry Strange Radio
Drama. 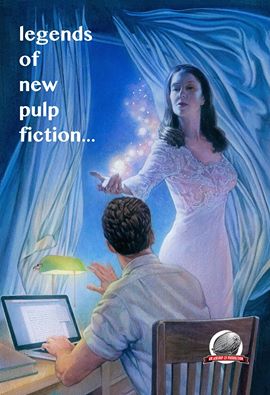 Legends of New Pulp Fiction
Tony’s story “The Aquarium” is in the newest collection from Airship 27 Productions. This crime tale features “Doc” Salvatore Scaldero, a former enforcer for an outlaw motorcycle club.  Here is an excerpt:

She stood, naked, in the hallway. In this light, the blood that dripped from her fingers and pooled by her bare foot had a dark brown color. When did she lose her shoes? She wondered. Her chest rose and fell rapidly as if she had been in a fight for her life. She teetered and put a hand on the wall to support herself. Later, one of the local tabloids would use a photograph of that almost perfect, albeit blood-stained, hand print in a series of articles outlining the horrific events leading up to this day. For now, though, it was nothing more than an impression of a girl trying not to lose her balance. Her heart was jumping like the violin refrain from the movie Psycho. At her feet lay a naked dead man. She wasn’t a doctor, she hadn’t graduated high school, but she knew no one could survive with half their skull chopped open and parts of their brain oozing out from the wound. His hands lay severed from his body. She looked between his legs and doubled over—dry heaving next to his shoulder.

The Ninth Circle Vol. 2: Night of the Bloodthirsty Ghouls
Nurse Nancy Harrigan’s Mercy Center is under attack by unknown forces while a virus is turning the denizens of the Ninth Circle into bloodthirsty rage monsters. With Detective Stoddard and the other mobsters closing in, has Nancy finally met her match?

The 9th Precinct is known as ‘The Ninth Circle’, the part of town where all the losers end up. If you work for a company or the city government and they want to get rid of you, they put you in their office or working over on Last Chance Lane. If you’re a criminal and you’re hiding from the law, other criminals, and yourself, you end up in the Ninth Circle. Imagine the city as a dumpster.

The Ninth Circle Volume Two: Night of the Bloodthirsty Ghouls by Tony Sarrecchia. Based on a concept created by Tommy Hancock. From Pro Se Productions.

Fat Zombie: “On the Road to Chattanooga”
Can an overweight, diabetic, asthmatic survive a zombie apocalypse? Find out in Tony’s short story in this anthology of unlikely survivors of the apocalypse.

This site uses Akismet to reduce spam. Learn how your comment data is processed.