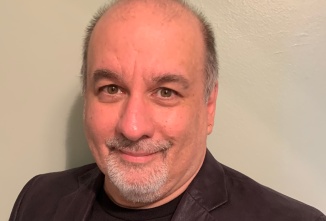 His radio dramas have been performed in front of live audiences at Hear Now, the audio equivalent of a film festival; DragonCon, the largest multimedia, science fiction and fantasy convention in the universe; and other conventions and streaming events. The Harry Strange Radio Drama has racked up almost 400,000 downloads.

He’s been commissioned to write radio-drama adaptations of Jeremiah Willstone in A Choir of Demons, an Anthony Francis short story;  The Probability Broach, based on L. Neil Smith’s novel The Probability Broach; and Wet Work, based on the novel by Phillip Nutman. Tony’s short prose fiction appears in several anthologies, and he’s published a complete collection of the Harry Strange Radio Drama Season 1 scripts.

A professional speaker and presenter for 20 years for organizations such as AT&T, Time Magazine, and Entertainment Weekly; he has also worked as a bouncer, disc jockey, sales manager, telemarketer, and electronic warfare systems specialist. He often appears at conventions and book signings where he talks about writing, producing, and B-movies.

He regularly tweets at https://twitter.com/tonythescribe and has a Facebook thing at https://www.facebook.com/tonysarrecchia

He has two children and lives in Atlanta with his wife (who is also his muse), and two rescue dogs: a boxador and a pit bull.

Buy his books here: https://www.amazon.com/Tony-Sarrecchia/e/B00SUQP7HM (or your favorite bookseller)

Lady Sherlock Holmes in the case of The Lady In Red, Performed live by the Atlanta Radio Theater Company, 221B Con, Atlanta, 2019

Lady Sherlock Holmes in the case of The Dancing Cadavers, Performed live by the Atlanta Radio Theater Company, 221B Con, Atlanta, 2018

Harry Strange in the Stones of Solomon the collected scripts of Season One of the Harry Strange Radio Drama. Published May 2015 by Pen to Parchment Press

“On the Road to Chattanooga” published in Fat Zombie, anthology, January 2015, by Permuted Press

For outstanding audio in the drama or comedy category: Harry Strange episode 116, “The Blink of an Eye.”

This site uses Akismet to reduce spam. Learn how your comment data is processed.