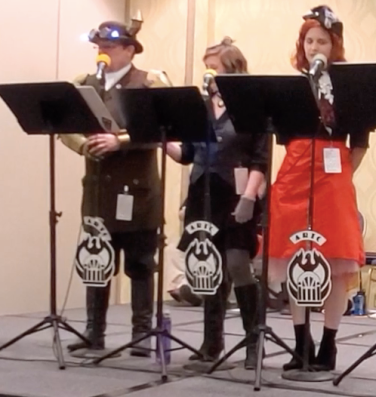 Strap on your video watching cap and enjoy the live performance of “Lady Sherlock Holmes in the Case of the Woman in Red,” an audio drama written by me and performed by the Atlanta Radio Theatre Company. Props to the person on Emma Lance’s team who was kind enough to video the show on a cell phone and provide it here for your viewing pleasure.

In this episode, Lady Sherlock is called in to consult on a body found at the bottom of an elevator on the HMS Baker Street; an outer atmospheric ship set in a geostationary orbit above London. A few weeks later, a ‘licentious libertine from New Jersey,’ Miss Irene Adler, hires Sherlock to find her diary. Reluctant at first, Sherlock eventually takes the case which leads to a showdown in a graveyard with crazed Prussians and Watson nearly ends up as an ornament in a mad genius’s collection.

Set in a world where England and France sail among the stars in Outer Atmospheric Ships, while America enters its reconstruction period; Lady Sherlock is a non-traditional hero in a universe filled with automatons, directed-energy-beams, and analytical engines. This is the second episode in a planned 8 episode arc.

Next year, ARTC will perform the third episode: “Lady Sherlock Holmes meets Frankenstein” at 221b Con in Atlanta.

And, if you’re so inclined, check out the episode 1 novella: Lady Sherlock Holmes in the Case of the Dancing Cadavers available on Amazon and your favorite booksellers. Now, sit back and enjoy Lady Sherlock, Dr. Watson, and Irene Adler.