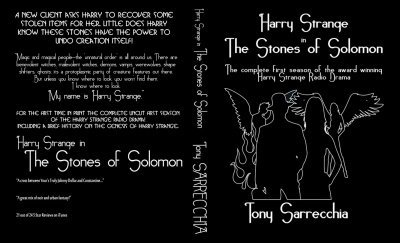 For the first time in print, the first season scripts of The Harry Strange Radio Drama.

A beautiful woman walks into Harry’s office and asks him to recover some property stolen by her ex-lover. Harry surmises two things, she’s not telling him everything, and she’s rich. This is his kind of case. He takes the case, cashes her check and loses his taste for red meat for awhile. Much later, he’ll discover those ‘little stones’ can mean the end to creation.

Along the way to saving the world Harry fights demons, the mistress of nightmares, vampires, werewolves, Lilith, and a horrible little troll of a man named Mr. K.

These are the original, uncut scripts from the award winning Harry Strange Radio Drama.  Episodes in this edition:

Harry Strange in the Stones of Solomon is copyright (C) 2010 – 2015 by Tony Sarrecchia. All rights reserved. No part of this story may be used or reproduced in any manner whatsoever without written permission of the author except in the case of brief quotations used in critical articles or reviews.

For more information contact the author at tony.sarrecchia@gmail.com
This is a work of fiction. All characters, organizations, and events in the story are either creations in the author’s imagination or are used fictitiously.
Listen to episodes of the Harry Strange Radio Drama at www.harrystrange.com

Tony Sarrecchia (www.tsarrecchia.com) is a storyteller whose works include audio dramas, screenplays, short stories, novels, and novellas. View all posts by Tony Sarrecchia