I’ve been working. No, seriously, I have. Stop laughing.

I am working on a serial drama harking back to the old days of entertainment when, rather than sitting back and watching the pretty colors, consumers of said entertainment had to get more involved. I am talking about what is often stodgily referred to as ‘Old Time Radio’.  That moniker is accurate enough, but it seems to me that it brings up visions of 1930’s advertisements for Orange Crush soft drink and zoot suit wearing hipsters.

I prefer Classic Radio Entertainment. What the best CRE did was offer its listeners the chance to participate in some cerebral calisthenics whilst entertaining them with characters who became (and, in many cases still are) part of our collective consciousness.  CRE demanded listener investment.

All this leads to my project. For the last few years I’ve been working on a radio drama that is part 1930’s style detective noir, part X-files, and part Buffy the Vampire Slayer. It wasn’t until the last half of last year that I decided it was time to move forward on Harry, start a new project, or give up on the dream of being a fiction writer. I opted to move forward-with the bulk of the episodes being written between November 2009 and January 2010.

Harry is a private eye-type character in the Sam Spade ilk. But Harry is more than what he seems. In the first episode, he witnesses a man being turned inside out. Later episodes feature Harry doing battle with Lovecraftian fiends and demons of all flavors.

I wrote Harry Strange  in audio-play format and, very soon, I will start auditioning actors interested in doing voice-over work.  Yep, I am going to self-produce it. Before that though, I will be asking a few folks (probably about 3-5) to critique the scripts for the first season (15 episodes). I am rereading them in the next few weeks to tease-up themes and back-stories that occurred without my conscious design. If you want to be a cool script critique volunteer email me now. (tony@tonysarrecchia.com) 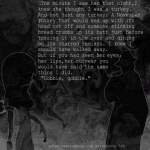 So, that’s what I’ve been doing since Christmas. Well, that and non-fiction political stuff, but we don’t want to talk about all that. If you follow my tweets you’ll know that from time to time the political-obsessive-compulsive (POC) I share my brain with takes over and starts spouting all sorts of anarcho-capitalist libertarian constitutionalist beliefs. If you’re not following me on Twitter, feel free to do so; I promise I try to keep the POC in line. 🙂

Okay, back to finish the final episode of Harry Strange. Keep writing and reading.